Home News Feed I Can’t Go Back To My School Because Of Shame –14-Year-Old Girl...
Facebook
Twitter
WhatsApp

There were about 10 other mothers with their newborns placed in baby cots beside their beds in the post-natal ward of the Igando General Hospital, Lagos. But here, Blessing Victor (not real name) stood out. 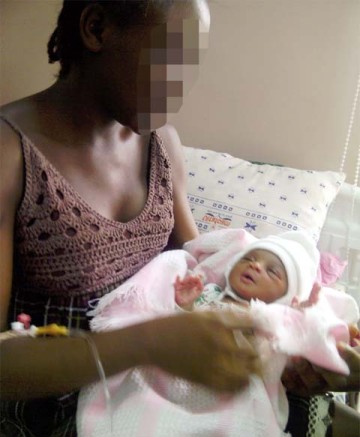 In fact, rather than focus attention on their own relations, many of the visitors directed their gaze at Victor’s corner. The reason was obvious.

She was just a kid, a 14-year-old girl. What she was doing as this correspondent walked in was indeed something that would attract attention from wandering eyes around the ward.

She stretched out her baby on the bed. Armed with a wad of cotton wool and a bottle of a dressing solution, the young mother was cleaning the baby’s umbilical opening that was cut less than 24 hours earlier.

Blessing’s mother, who walked in with our correspondent, was alarmed somewhat and asked why she was doing that without asking for permission.

“The nurses have taught me how to do it,” the girl said.

It was clear the girl had resigned herself to the fate life has dealt her. She clearly did not want to shy away from the responsibility of taking care of her newborn.

It had been reported of Blessing’s plight at the Igando General Hospital, where she had been excluded from maternal health care due to the fact that her parents had no money.

The Executive Director of the Women Advocates Research and Documentation Centre, Dr. Abiola Akiyode-Afolabi, had written an open letter to the Lagos State Governor, Babatunde Fashola, on the issue.

“The victim is denied access to antenatal facilities due to the high user fees and cost related to child delivery in all Lagos state-owned hospitals. Doctors say her life is in serious danger unless she receives urgent necessary medical attention,” Akiyode-Afolabi had said at the time.

Perhaps, in response to the publication, the Lagos State Government swung into action and ordered the hospital to give Blessing all the treatment she required free of charge and return the money that had been paid by the WARDC and the parents.

On Monday morning, Blessing was delivered of a healthy baby girl through a Caesarean Section.

“I had named her while I was still pregnant. I told my mother she would be a girl and I would name her Mercy,” the young mother said.

Tobi, the boy (said to be 21 years old) who sexually abused Blessing and impregnated her has vanished.

Blessing was living with her grandfather, a 64-year-old retiree, who depends on his daughter (Blessing’s mother) for subsistence.

“I am a retiree. I retired from the Nigerian Port Authority and government does not pay our pension. My daughter does not live here. She is the one who works very hard to feed me.  She kept her daughter with me so that the girl could help me around the house,” he said.

Tobi, a tenant in a one-room apartment in the compound where Blessing lived with her retiree grandfather in Isheri area of Lagos, took advantage of the child under the guise that he was assisting her in preparation for her November/December School Certificate Examination conducted by the West African Examination Council.

Blessing had told her mother of her intention to sit for the examination ahead of her eligibility in her own school. But her mother barely had enough for their upkeep. Blessing had just been promoted to Senior Secondary School Class Three.

But the young girl was deceived, lured and abused by her young neighbour, Tobi.

Blessing, her mother’s only child, said, “I don’t know his surname, I only know him as Tobi. He told me he finished university long time ago.

“He said he studied Computer Engineering. I cannot remember very well but I think he mentioned that he schooled in Ekpoma. He did not force me or beat me before doing it.

“He told me he would give me money to obtain GCE form if I allowed him to sleep with me. It was only once. I did not think about pregnancy and did not know I was pregnant until my mother took me to the hospital.”

Blessing’s mother, who visited her father and daughter regularly, had noticed the change in her daughter’s body, but she initially dismissed it as nothing.

She went for a visit again sometime later and was convinced that her daughter must be pregnant.

“Her skin was so different. I know the symptoms of pregnancy and I could notice them on her. I had asked her many times and she denied it. But I could not tell my dad. I had to take her to a hospital for a test,” she said.

At the hospital, it was confirmed that Blessing was 16 months pregnant.

Both mother and daughter broke down when the news hit them. “I wanted to die. I was so sad,” Blessing said.

“I could not stop crying,” her mother said

The problem shifted to how Blessing’s mother would tell her father. It would certainly kill the old man, she thought.

But first, in anger, she stomped out of the hospital to the police station and reported the case. A policeman followed her and Tobi was arrested. The news about the pregnancy was broken to Blessing’s grandfather by the policeman. The old man too broke down.

“I was stunned. I cried for three days. She has just been promoted to SS 3. How can this happen? I don’t allow her to move around neighbour’s apartments. It was really painful for me that this has to happen under my care,”he said.

Tobi was said to have been released the following day after a police woman in charge of rape cases at the Isheri Osun Police Division reportedly told them, “This is a family problem now because pregnancy is involved.”

That was in August 2013. Tobi has not been seen since then. His mother, who lives in another part of Lagos, told our correspondent on the phone that her son travelled to their hometown in Edo State to take care of his ailing father.

The woman who spoke on the phone said her name was Florence Albert.

She said, “I am not hiding Tobi. The parents of the girl said they did not want to see him around. That was why I told him to give them space. They are always angry anytime they see him.

“I told them that I could help out anytime they needed anything. The deed is already done. I try to do as much as I can afford. I can hardly feed myself too. Tobi did not finish secondary school. His father abandoned us and he could not proceed in his education. He is currently working as a barber.”

All Blessing knows about her child’s father is the fact that he is from Edo State and had no job.

Perhaps, she has not fully understood the ramification of her new life, Blessing did not show any sign of depression as she spoke.

When asked what she would do if her child’s father suddenly came to claim paternity, the young mother’s expression changed.

“He won’t do that. He would be insane to do that. Is it that easy for me to carry a pregnancy for nine months and I would hand over my child to him just like that?” she said.

Blessing looked at her child. She smiled. It was clear everything had changed for this young girl. Our correspondent wanted to know how she felt about her child.

“How can I hate this child? I carried her inside me for nine months. Even if her father is a bastard, she is still my child,” she said.

A cacophony of baby cries circulated the post-natal ward at Igando General Hospital. But Mercy was quiet. It was like the baby was aware of the troubled circumstance of her birth and decided to be of less trouble to her young mother.

Blessing’s mother has said she would undertake the nursing of the child to allow the young mother to complete her secondary education.

The girl’s grandfather said she was doing very well in school. It was obvious as the girl conversed in good spoken English with her mother throughout the time our correspondent was there.

“I will like to go back to school. I plan to study Theatre Arts in the university. But I will be too ashamed to go back to my previous school. I will complete my secondary school in another school,” she said.

It was a wonder that none of the girl’s teachers noticed she was four months pregnant.

“I slept a lot in school. My teachers always jokingly asked if I was pregnant. But I did not know it was true. They did not know also. They were only joking,” she said

Blessing’s case puts in perspective Sector 31 of Nigeria’s Child Rights Act 2003, which states, “No person shall have sexual intercourse with a child. When a person is charged with an offence under this section, it is immaterial that the sexual intercourse was with the consent of the child.”

The law prescribes a sentence of 14 years imprisonment for an offender charged under this section upon conviction.

It is not clear whether the police woman who released Tobi on bail is familiar with the provisions of this law.

Her story is one of thousands of such cases reported and unreported in Nigeria every year.

Specialist obstetrician and gynaecologist, Dr. Stephen Ayosanmi, of the Department of Family Medicine, Ekiti State University Teaching Hospital, Ado-Ekiti, explained that teenage pregnancy is one that comes with a very high risk.

He named some of the risks associated with teenage births as haemorrhage, obstructed labour, sepsis, eclampsia and anaemia.

Ayosanmi said, “Teenage mothers have the tendency of bleeding excessively during birth and this may lead to death. Generally, teenage pregnancy is one of the leading causes of maternal mortality.

“She could rupture her uterus and bleed excessively. Also, because the pelvis is too small and does not have enough power to push during labour, the issue of obstructed labour comes in.

He said the CS through which Blessing was delivered was as a result of the fact that her pelvis would have been too small for a natural birth.

Blessing has escaped much of the problems enumerated by Ayosanmi here. But there is a downside.

“Her reproductive chances have been reduced because you can only undertake CS three times,” the doctor said.