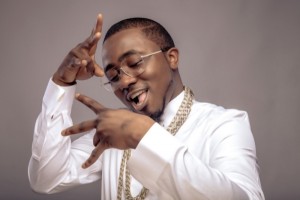 In a shocking revelation to most people, the Aboki of Naija music — Ice Prince came out to say that Eva Alordiah was his first girlfriend in Lagos.

While the Choc city rapper was performing at the second anniversary edition of the monthly Loud ‘N’ Proud Live music concert which held at Soul Lounge, Intercontinental Hotel, Lagos on Thursday, January 30, 2014 — Ice Prince confessed that he had a past relationship with promising female rapper Eva Alordiah.

Before kicking off his performance, the rapper (who’s known for taking his time to give shout outs) revealed that Eva was the first girlfriend he had when he came to Lagos back in 2008.

‘Let me tell you something I’ve never said before in public,‘ Ice Prince announced as he pulled Eva from her seat onto the stage. ‘Eva was the first girlfriend I had when I came to Lagos; that was way back.‘

A surprised looking Eva then grabbed the mic, laughed and said, ‘I don’t know what he’s talking about.‘

Eva was strongly affiliated with M.I and the Loopy crew back in 2008 and 2009, right about when M.I released his debut album ‘Talk About It‘.

Ice Prince is also rumored to have dated fashion designer Yvonne Nwosu in the past.