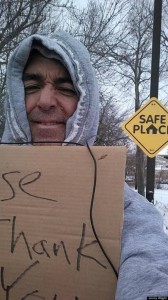 Last Christmas, a businessman from Iowa came up with a very creative way of giving. Posing as a homeless person, Jonnie Wright gave away envelopes of cash to all the people who showed him kindness.

On December 24, Wright stood at a street corner for four hours, in the bitter cold, in the Des Moines suburb of Johnston. He gave away about 50 envelopes, a total of $1,000 in cash. Five of them contained $100 bills and the rest, $10 bills. All the envelopes came with a letter of appreciation as well.

One of the recipients of the envelopes was a Des Moines resident, Rob Taylor. The letter informed him that the ‘bum’ he just handed money to wasn’t homeless, but a successful businessman giving back to good people.

Taylor was in shock. “I was blown away,” he said. “The first thing I did was call my wife on the phone and I could hardly talk to her. I said, ‘You wouldn’t believe what just happened to me.’” He said that the gesture reminded him that Christmas isn’t just about gifts, it’s about giving back.

“His action was one of the kindest and most Christian thing that I’ve ever witnessed,” said Taylor. “I left Jonnie a voicemail yesterday that my wife Christi and I intend on donating to an unnamed Christian charity because of this letter and the $10 he gave me. What he did yesterday brought tears to my eyes. The world needs more Jonnies.”

Through the letter, Wright thanked people for their donations. It read: “I am here to give thanks for the many blessings in my life by paying them forward and honoring you and others who give. Please take the money in this envelope and keep it, spend it, donate it, pay it forward, whatever your heart tells you to do.”

He also talked about what he planned to do with the donations: “All of the money donated by you and others will be given to The Bethel Mission in Del Moines. I am also matching each donation dollar for dollar.”

As a temporarily homeless person, Wright made a rather odd collection himself, which he wrote about on his Facebook wall – “$363.02 in cash, three pepperoni sandwiches, two donuts, one pack of M&Ms, an apple and a pair of gloves.” He said that this little project had been on his bucket list for a long time. “I always knew I wanted to give back.”

He wrote about his “transformative” experience: “Across the four hours, wearing inadequate clothing in 12 degree temps, shivering with head bowed, standing in front of strangers, afraid to look them in the eye and silently begging for help, I felt helpless and cold and humbled and ignored and broken – and proud and grateful and thrilled and honored and loved.”

“The power of human kindness and generosity carved a permanent place and space in my heart and I will never forget their loving faces and gentle touch as they placed their hard-earned money in my hand,” he added. The story went viral this week and hundreds of people have thanked Wright on social media for his generosity.

Lots of people make charitable donations, but it takes a truly special person to come up with a warm gesture like this. Jonnie Wright sure does seem to be one such person!