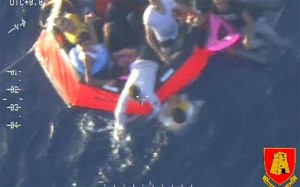 Nigerian immigrants were among 233 African immigrants who were rescued from a boat in Mediterranean waters, South of Sicily, by the Italian Navy.

Several Africans believed to be fleeing harsh economic conditions in their home countries have often resorted to crossing into parts of Europe using unofficial channels, not minding the dangers involved. Many of them have died in what is described as “the immigration crisis” mainly by African countries.

In a statement, the Italian navy said that it picked the immigrants up in choppy seas late on Wednesday and was ferrying them yesterday to a port near Syracuse on Sicily’s eastern coast.

According to the News Agency of Nigeria (NAN), It said that migrants on board were men and women from Eritrea, Nigeria, Somalia, Zambia and Mali as well as from Pakistan.

The statement further noted that sea arrivals to Italy from Northern Africa were more than tripled in 2013, fuelled by refugees from Syria’s civil war and political strife in the Horn of Africa.

In October, 366 Eritreans drowned in a shipwreck near the shore of the Italian island of Lampedusa.

Several Nigerians have in the past perished while trying to get to Europe through unofficial channels.