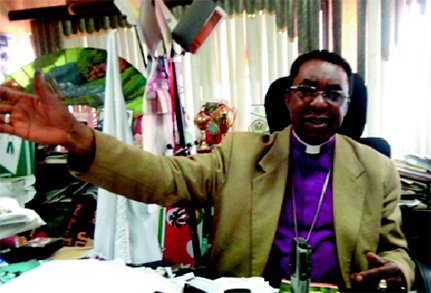 The Chairman of the Christian Association of Nigeria, CAN, South East Zone, Rt. Rev. Dr. Emmanuel Chukwuma has decried the slow pace of development in Nigeria.

Bishop Chukwuma, who is also the Anglican Bishop of Enugu Diocese, was speaking yesterday shortly after a church service held at the Good Shepard Cathedral, Enugu, to mark his 60th Birthday.

He expressed regret that 100 years after the amalgamation of the northern and southern protectorates, Nigeria was still importing handkerchiefs.

He also noted that the country was yet to find a sense of direction at 100 years.

“It is a shame that Nigeria cannot produce a handkerchief at 100 years. Our leaders need to be sensible. Anybody above 70 years should retire and become a consultant”, he said.

The cleric, who expressed appreciation to God and his followers for his numerous achievements since he became Bishop, assured that he would not be discouraged by the current situation of things in the country.

He advised the nation’s leaders and elders to be sensible and distance themselves from corruption as well as to give the young ones opportunity to serve their father land in order to avert a serious revolution.

The CAN leader also condemned Tuesday’s car bombing in Maiduguri, Borno State that led to the death of many innocent citizens, warning that Nigeria cannot afford another civil war.

On the recently signed Anti-Gay bill, the cleric hailed President Goodluck Jonathan for resisting pressure from western nations, stating that there is nothing like gay in the Bible.

Bishop Chukwuma, however, urged the government to ensure the implementation of the new law, insisting that Gay practice was dehumanizing.