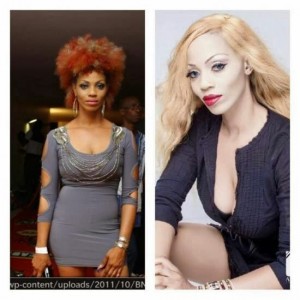 It seems like Michael Jackson’s passing on has gained him some followers. Maybe not as extreme as his case but very similar.

Do you remember Nollywood actress — Thelma O’ Kaz? If you don’t that’s a photo of her above.

Don’t get it twisted though, she isn’t playing the role of a ghost in the picture above, that’s her new look.

Thelma in less than one year changed skin from left to right appearing brighter than normal.

What do you think of this Michael Jackson wannabe?!?