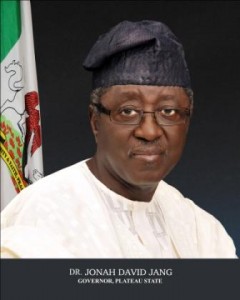 Governor Jonah Jang of Plateau State on Tuesday gave some members of his cabinet a surprise Eid-el-Maulud gift as he reconstituted the state executive council.

The minor cabinet reshuffle was contained in a press statement made available to newsmen and signed by the director of press and public affairs to the governor, James Mannok.

According to the statement, the former commissioner for tourism, Dongsar S. Dongtoe is to take charge of the Ministry of Environment, while Sarah Simi Yusuf was redeployed to the Ministry of Women Affairs.

The statement further said that nominees for other ministries would be in due course.