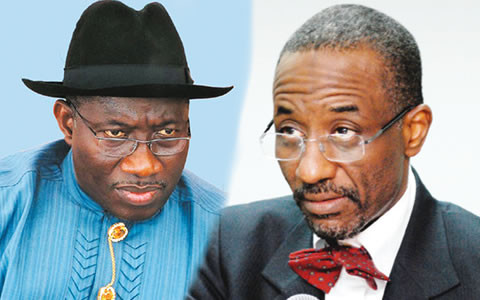 Factional Chairman of the Nigeria Governors Forum (NGF) and Governor of Plateau State, Jonah Jang, has advised the Central Bank of Nigeria (CBN) Governor, Malam Lamido Sanusi to tone down his utterances concerning stories making the rounds that President Goodluck Jonathan has asked for his resignation.

In a statement issued in Abuja by his faction’s Media Office, which was signed by Mr. Kassim Yakubu, Jang reminded the CBN governor that he was not bigger than the Nigerian government that appointed him.

The governor added that if there was no longer trust between him and Mr. President, the honourable thing for him to do is give way to someone that could work with the government.

He said, “If the relationship between the CBN Governor and President Jonathan has become frosty, it is only logical that the President becomes uncomfortable knowing how sensitive the Central Bank is to his transformation agenda.

“Moreover, we elected the President to run the country and so we cannot be held hostage by an appointee of government if it is true that Mr. President has asked for the resignation of the CBN Governor”.

According to the Plateau governor, Nigerians put their trust in President Jonathan to pilot the affairs of the nation when they voted him in as President and therefore he should be given the freedom to run his government without unnecessary distractions especially from appointees, who serve at the pleasure of the Federal Government and Mr. President.

Jang, therefore, called on Nigerians to continue to watch out for those usual beneficiaries of conflict, who he said would seek to make an issue out of this by bending the facts to suit their mischievous agenda.