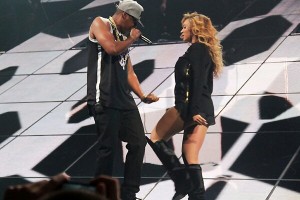 Entertainment power couple — Jay Z and Beyonce have been allegedly scheduled to perform their hit old tune — ‘Crazy in love’, together at the  at the upcoming Grammy Awards holding on Sunday, January 26, 2014.

No performance track list has been revealed but we know the couple have more than enough songs to thrill the crowd, be it their hit collabos in 2002 – ‘Crazy in love’ and ‘Bonnie and Clyde’ or in 2006 ‘Déja Vu’ and ‘Upgrade U’ or most recently ‘Drunk in love’ off Bey’s surprise eponymous album.

The awards will be hosted by veteran rapper LL Cool J.