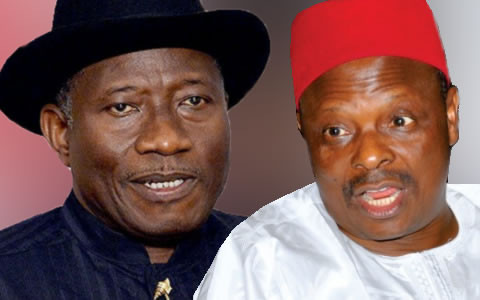 Governor Rabi’u Musa Kwankwaso of Kano State has accused President Goodluck Jonathan of leading Nigeria towards disaster because he lacks courage and the competence to do what he called the “right thing” for the country.

Kwankwaso made this known at a meeting with the leadership of the Northern Elders Forum, NEF, at the Government House in Kano, on Tuesday night.

This was contained in a statement signed by the Director of Press and Public Affairs, Baba Dantiye, which was made available to journalists on Wednesday.

The statement quoted the governor as saying that despite advice and observations made by respected leaders from within and outside the country on how to put Nigeria on the right track, the Presidency had remained insensitive.

Kwankwaso said, “When we met with the President, as Northern governors, he told us that the former US Secretary of State, Lady Clinton, told him that as President he had to look at the issue of the North very critically.

“She noted that there was an imbalance in terms of patronage, appointments and sharing of resources.

“He assured that he was looking at those comments and that was why he was delaying appointments into boards and so on.

“Since that meeting, we have not seen anything or changes so it is my conclusion that the President lacks the capacity and courage to do the right thing”.

The governor, who recently defected from the ruling Peoples Democratic Party (PDP) to All Progressives Congress, APC, also laid the allegation of injustice at the doorstep of the Jonathan administration following its proposal of N2bn for projects in the North-East as against the N111bn proposed for projects in the South-South and the South-East geo-political zones.

He expressed dismay that the federal budget was heavily tilted in favour of one section of the country while the other parts were wallowing in illiteracy, underdevelopment and misery.

Kwankwaso noted that “We have had enough crises in this country and it is not right to plant seeds of crisis in the future.

“Look at the North-East that was allocated N2bn in the current budget, N2bn is what Mr. President allocated to non-APC states for supporting him, while N111bn was allocated to the South-East and South-South. This is not close to fairness”.

While noting that was happening in the country in terms of poverty, insecurity and joblessness especially in the North today should not be happening in civilized societies, the governor appealed to the Federal Government to listen to the voices of reason so as to move the country in the right direction.

He also clarified that his position on current national issues was not based on religion, ethnicity or sectionalism but stemmed from the desire to see that every Nigerian was treated equally without discrimination.

The governor, therefore, charged the National Assembly to rise up to the responsibility of opposing injustice especially as was currently being perpetrated by the government.

Earlier, in their separate remarks, the chairman of the forum and elder statesman, Alhaji Yusuf Maitama Sule, Danmasanin Kano, and his deputy, Dr. Paul Unongo, explained that they were not satisfied with the current political developments in the country, especially as they affected the North.

They explained that the visit to Kwankwaso was to identify with his achievements and sterling leadership qualities as well as to look at several issues that would bring about responsible governance, unity and even development of the country.

In its reaction to the statement credited to Kwankwaso, the Presidency said it was an indication that the governor was in need of psychiatric help.

The presidency’s position was articulated by the Special Adviser to the President on Political Matters, Mr. Ahmed Gulak.

According to the presidential aide, it would only take a mentally imbalanced person to say that Jonathan lacked competence and guts to manage the affairs of the country appropriately, adding that Kwankwaso was a politically drowning man.

“That is a statement of a man that is drowning politically. He is mentally imbalanced. He needs a psychiatric help. It is only a man that is not balanced mentally that can be describing the President in that manner. Nigerians know what is being done by the President”, he said.