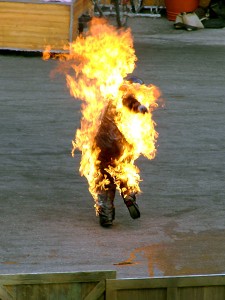 A young man has burnt to death in Ise-Ekiti, Ekiti State, after he was set ablaze by angry youths who accused him of shooting dead his landlord’s daughter.

The young man, simply identified as Austin was apprehended at a motor park and was set ablaze following the shooting incident which caused tension in the community.

The youths’ anger knew no bounds as the Divisional Police Officer (DPO) of Ise Police station was reportedly hit on the head by the angry youths for attempting to rescue Austin just before he was set ablaze.

Austin, a trader in his 30s reportedly shot the girl in front of her father’s house at Iro Oraye area of the town.

It was gathered that some sympathisers had taken him to the palace of the monarch of Ise Ekiti, Oba Adetunji Ajayi possibly to prevent him from being mobbed, but the irate youths later overpowered the palace guards and took him to the town’s main motor park where he was burnt.

The remains of the slain girl and that of her killer, which was burnt beyond recognition, have been deposited at a mortuary in the town by the police.

After delivering the jungle justice, youths in the community were said to have fled for fear of possible arrest by the police.