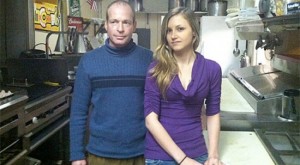 In a world where getting a kind word from your boss is a huge achievement, businessman Michael De Beyer comes across as one-of-a-kind. Where else do you get to see employers selling an entire business to help out an employee in need? I for one have never heard of such a thing before.

De Beyer is the owner of the Kaiserhof Restaurant and Wunderbar, in Montgomery, Texas. Brittany Mathis, his 19-year-old employee, is suffering from a tumor that she cannot afford to get treated. So De Beyer has decided to sell the 6,000 square foot family restaurant that he has owned for 17 years, and donate money to Brittany.

Brittany appears to be a healthy girl, but the serious ailment is taking a toll on her. It all began when she noticed a rash on her leg. “I went to the hospital and found out it was my blood clotting,” she said. “So, they wanted to keep me and do CAT scans and MRIs and the next day they came in and told me I had a tumor.”

Unfortunately, Brittany has no money even to test if the tumor is malignant or benign. She doesn’t have insurance yet, and hasn’t signed up for Affordable Healthcare. Her family has been through its fair share of problems. Brittany’s father, John Mathis, had a brain tumor in the year 2000. No one knew about it until it was too late – it ruptured unexpectedly and he passed away.

According to De Beyer, “Here’s a family, they really work hard, they have a lot of stuff against them in the past and they are not holding their hand open and they didn’t even ask anybody for help. I just can’t be standing by and doing nothing. I have to try something because it’s not right.”

Brittany’s mother and sister also work at the restaurant. The family is completely overwhelmed by De Beyer’s gesture. “I really think it’s an amazing blessing and can’t thank him enough and his family,” Brittany said. “Never thought that anybody would do that and he did and it makes me feel really good.”

De Beyer believes that the restaurant is worth $2 million. He wants to sell it, help with Brittany’s treatment, and spend more time with his wife and two children. Sounds like a plan!