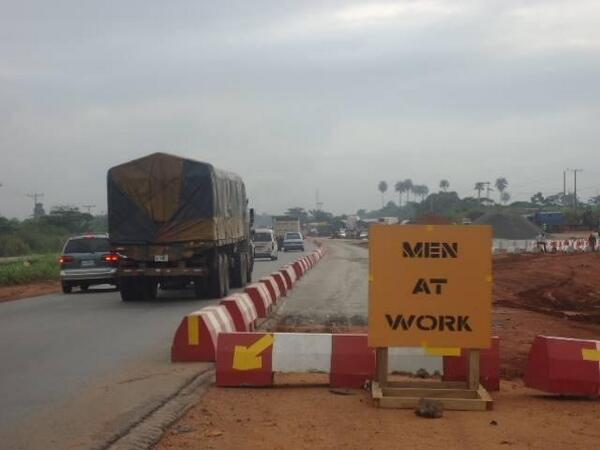 The Federal Government is to complete construction of the makeshift 25-km road on the Lagos-Ibadan highway this month, an official of the Federal Ministry of Works announced on Wednesday.

Mr Godwin Eke, who is a Deputy Director in the ministry made the announcement in an interview with the News Agency of Nigeria.

He said that the construction of the makeshift road was to divert vehicles, noting that work would continue on the main carriageway of the road.

The deputy director said that the old road would be completely removed to give way for the new project, adding that milling of the road would be done sectionally.

“The entire road would be milled but it would be section by section.

“First, the contractor, Julius Berger has to plan diversion while working on the carriageway, what we are doing now is temporary diversion so that the main work would start.”

He explained that five kilometres of the makeshift road had been constructed on the Ibadan-bound section of the road and was currently being extended by another five kilometres.

Eke explained that five kilometres was also being constructed on the Lagos-bound carriageway, starting from the Shagamu Interchange.

The deputy director said that a total of 25 kilometres would be constructed by the end of January.

He said, however, that all the constructions were temporary and that permanent construction would soon begin on the Lagos-bound section starting from Shagamu.

Eke who is the officer in charge of section one reconstruction of the highway, said that diversion signs would be placed 100 metres from the constructed portions to guide those coming to Lagos from Abeokuta and other areas.

He said that construction of the permanent road would begin from the Shagamu Interchange because of high traffic on the Lagos side, adding that, a traffic management plan was being concluded and “would be ready this week”.

He lamented that high traffic and reckless driving were slowing down work on the highway.

“Lagos-bound traffic is where we have most of the problems”, he said.

A NAN correspondent who made a trip on the road reports that crushed stone bases were laid on the Ibadan-bound carriageway from around the Redeemed Christian Church of God area up to the Shagamu Interchange.

Median barriers were also used to demarcate the road to serve as diversion routes. (NAN)