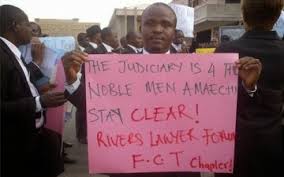 The series of protests rocking Rivers State continued on Thursday when scores of lawyers took to the streets of Port Harcourt, the state capital, to stage a demonstration over the failure of Governor Rotimi Amaechi to appoint a substantive Chief Judge for the state.

The lawyers, who converged on the main gate of the State High Court under the auspices of the Forum of Concerned Lawyers of The Nigerian Bar Association, Port Harcourt Branch, said the absence of a chief judge in the state was hindering the dispense of justice in Rivers.

The lawyers, who expressed concern over the continued absence of a substantive chief judge in the state, gathered at the State High Court premises around 7.20am, chanting solidarity songs against the state government.

The piqued lawyers displayed placards with inscriptions such as ‘APC or PDP not our concern; Amaechi, appoint a chief judge;’ ‘Even in the military, there was chief judge; Rivers State Government, don’t play politics with the appointment of a chief judge;’ ‘Judiciary not for sale;’ and ‘Amaechi, remember the rule of law brought you to power’.

Chief Coordinator of the Forum, Rev. Chris Itamunoala, who addressed the protesters, said the absence of a substantive state chief judge in Rivers had made the annual reprieve granted to prisoners by a state chief judge impossible.

He also noted that over 3,800 suspects in Port Harcourt Prison were still awaiting trial due to the absence of a chief judge that would assign cases to judges.

He said, “Having regard for the doctrine of necessity, the independence and functions of the judiciary as an arm of government, we hereby urge the National Judicial Council, in collaboration with our respective judges of Rivers State High Court, to urgently facilitate the appointment of whosoever is the most senior judge of the High Court as a chief judge.

“For the record, over the past five months, no single filed case has been assigned in consequence of the challenges at hand. To those who care, the judiciary remains our principal place of work”, Itamunoala said.