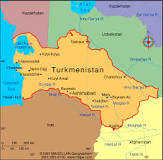 The autocratic leader of Turkmenistan has fired the country’s chief banker and several other officials.

The firings came after Berdymukhamedov issued a reprimand to Japarov and several other bankers for receiving regular bonuses and ordered them to pay them back.

Berdymukhamedov also fired Kakageldy Abdullayev, the head of Turkmengaz state natural gas company over a low output and the failure to properly oversee the use of gas resources.

Turkmenistan boasts rich natural gas reserves estimated to be the fourth largest in the world.

Berdymukhamedov has run the Central Asian country with an iron fist since 2006.