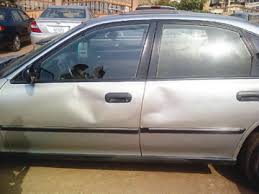 Two army officers have assaulted a correspondent of Leadership Newspapers in Ogun State, Mr. Kunle Olayeni, for allegedly refusing to give right of passage to them.

According to Olayemi, whose car was also damaged by the army officers, “the incident happened shortly after newsmen covered a special parade/laying of wreaths by Governor Ibikunle Amosun to mark this year’s Armed Forces Remembrance Day in Abeokuta.

“The trouble started when the military men, who drove in a private Peugeot car with number plate, Abuja AR 963 KWL, attempted to overtake my vehicle while heading for 35 Artillery Brigade, Alamala where the ceremony was to be rounded off by the governor.

“They tore my shirt and also battered my Honda Accord car at the state secretariat, Oke-Mosan, Abeokuta.

“Four of us were in the car, including three other correspondents, Wale Jokotoye of the News Agency of Nigeria, Olayinka Olukoya of Nigerian Tribune and Johnson Akinpelu of Alaroye, when the incident occurred.

“The army officer, who claimed to be in convoy of a lorry conveying some soldiers, came out and started insulting us.

“We explained that we never knew there was a convoy since the car behind was a private one, the officer, however, persisted in raining invective on us.

“The army officer started hitting my car with his boots severely, denting it and later forced the door of the car opened, pulling me out in the process.

“The officer then punched me in the face several times in the presence of other army personnel, including one addressed as Captain, with a name tag ‘Pedro’ and I was left bleeding in the mouth.

“The case was reported at the Ibara Divisional Police Headquarters, Abeokuta,” Olayeni said.