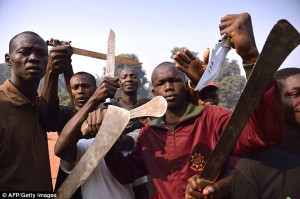 A member of a gang in the Central African Republic told the BBC that he killed a Muslim man and then ate his leg as revenge.

The man, whose name is Ouandja Magloire, killed a Muslim man he’d seen on a bus to avenge a Muslim gang’s alleged killing of his pregnant wife and sister-in-law, according to an account broadcast on Monday by the BBC’s Paul Wood. Magloire said people now call him “Mad Dog.”

Shocking cell phone video in the BBC report shows the aftermath of the killing. Magloire and a mob of about 20 youths identifying as Christians drag a charred, dismembered body through the dirt streets of Bangui, the nation’s capital. Magloire can be seen chewing something, his cheeks bulging.

“Muslim! Muslim! Muslim! I stabbed him in the head. I poured petrol on him. I burned him. Then I ate his leg, the whole thing right down to the white bone,” Magloire told the BBC.

According to the Independent:

“Acts of cannibalism are rare in the CAR, but many Christian fighters believe in magic, including wearing jewellery containing the flesh of men they have killed…. At least 1,000 people have been killed and tens of thousands made refugees in the north central African country in violence that began in December last year.”

Conflict between Christians and Muslims erupted in the CAR last month following a coup in which the country’s first Muslim leader, Michel Djotodia, seized power.Djotodia stepped down as president Jan. 10, sparking a new wave of violence.

“More than half a million people (out of a population of 4.6m) are displaced from their homes by recent fighting –- many of them children,” NGO International Medical Corps spokesman Josh Harris told IBTimes UK. “Over half the population of Bangui are seeking refuge at 60 sites across the city, mainly religious sites, where they have inadequate access to shelter, clean drinking water, latrines, food or healthcare.”