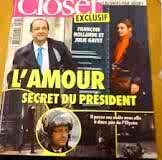 A French magazine known for stirring up controversies and never backing down from publishing sensitive stories has dared President Francois Hollande, claiming he was having a secret affair with an actress.

French magazine Closer said today that the President was having an affair with actress Julie Gayet, backing its claim with photographs after months of swirling rumours.

The weekly tabloid’s actions earned a rapid rebuke from the president, who said he was considering legal action over what he called an “attack” on his right to privacy.

Closer, echoing reports published on various websites in recent days, said Hollande routinely drives through Paris on his scooter to spend the night with his 41-year-old mistress.

“Around New Year’s Day, a helmeted head of state joined the actress at her apartment, where he has got into the habit of spending the night,” Closer wrote on its website.

Speaking in a personal capacity, Hollande condemned the report as an “attack on the right to privacy,” to which he “like every other citizen has a right”.

The president, in a statement released exclusively to AFP, said he was “looking into possible action, including legal action,” against the weekly magazine.

Closer said the pictures raised security concerns by showing that the head of state is accompanied by only one bodyguard when he treks halfway across Paris to Gayet’s flat.

The bodyguard “even brings the croissants”, Closer said.

Hollande lives with his partner Valerie Trierweiler, a journalist for whom he left fellow Socialist politician Segolene Royal, the mother of his four children.

Gayet, who appeared in one of Hollande’s 2012 election commercials, filed a complaint in March over rumours of the affair which she said were a breach of privacy.

Gayet, a mother of two, is an established television and cinema character actress who has appeared in more than 50 films.