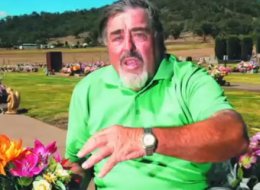 An Australian man kills a snake in a graveyard and this is the fangs he gets?

Jake Thomas, 66, was mowing a lawn in a cemetery in eastern Australia when he came upon a red-bellied black snake inside a vase on top of a tombstone in early January.

“I saw the black snake. It was in a headstone on the grave next to my daughter’s. It had stopped moving and I could see it was caught in a vase. There was about two foot hanging out,” he told Border Mail.

Thomas, a volunteer at Werris Creek Cemetery, didn’t want anyone to be bitten by the venomous snake, so he cut it in half with his shovel and went back to cutting the grass.

A short while later, he came back to get rid of the snake and put his hand in the vase to pick it up.

“It grabbed on to me even though it was dead,” Thomas said, according to the Daily Telegraph. “I pulled my hand out and saw two little marks and knew it had got hold of me.”

Those little marks left by the serpent packed a wallop.

He spent two days in intensive care being treated with anti-venom vaccine, according to NineMSN.com.

His hand was swollen for a week.

James Murphy, head of the Reptile Discovery Center at the Smithsonian’s National Zoo in Washington, D.C, said that snakes can still have a bite reflex up to 60 minutes after death, according to the website eCanada Now.