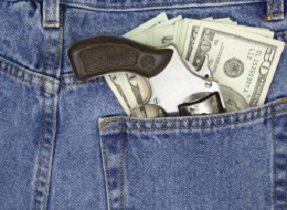 This Thursday, a man at the store in Brighton, Mich., reportedly reached for his wallet and accidentally grabbed his gun.

The 40-caliber Glock went off, and the 32-year-old ended up shooting himself in the rear end.

As s result of the accident, the man, whose name was not revealed, was treated for minor injuries at a nearby hospital.

He had a concealed pistol license, and no charges were expected to be filed, the local radio station reports.

Interestingly, it is not the first time the shopper hits bottom in public.