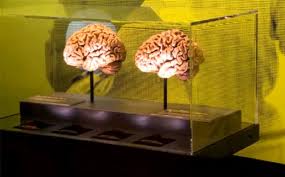 At least now this museum has some of piece of mind back.

David Charles, 21, is accused of stealing human brain tissue from the Indiana Medical History Museum in Indianapolis, and selling the looted organs on eBay, the Indy Star reported. Officials say Charles stole jars of preserved brain tissue — which came from deceased psychiatric patients — on multiple occasions over the past year.

Museum officials reported several break-ins over the course of the year. Police were tipped off to the underhanded eBay deals by a buyer who purchased six jars of brains at $100 apiece and later ascertained that the transactions might be fishy.

Investigators say they nabbed Charles in a sting operation, meeting up with him outside a Dairy Queen on December 16, Fox 59 reported.

They also note Charles wasn’t exactly discreet about his illicit endeavors. He wrote “Yo I got a bunch of human brains in jars for sale hmu [hit me up] for details u know u want one for Halloween,” on Facebook on October 14.

The museum has recovered much, though not all, of the stolen material, executive director Mary Ellen Hennessey Nottage told the Indy Star.

The brains that belong to the museum come from about 2,000 psychiatric patients from the now-closed Central State Hospital, which was in operation from 1848 to 1994, according to Raw Story. The Indiana Medical History Museum now stands on the site of the former hospital.

Charles is charged with theft and possession of marijuana and drug paraphernalia.