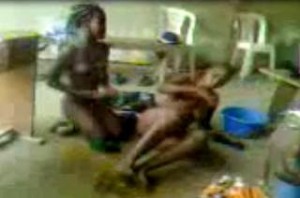 Saharareporters has learned of the arrest of all the perpetrators of a bestial torture and sodomy of three women in Ejigbo which happened February last year.

The arrest of the sodomy gang, Saharareporters was reliably informed, happened at the palace of Oba Moruf Adisa Ojoola of Ejigbo earlier today.
The arrest was possible due to immense pressure on Oba Moruf himself, he reportedly got all the men assembled at his palace around 11pm Saturday night. The gathering of the gang by Oba Moruf followed a closure of the market yesterday, which prevented the market men and women from carrying out their trading activities until the perpetrators were identified and brought to book.
The gang’s torture and sodomizing of a lady by thrusting of a bottle of ground pepper and sticks in her genital had resulted in her death, two months after. She was later identified as “Juliana” by her father, a palm wine tapper, who revealed that he also lost a toddler in the incidence as his wife, mother of the baby while being tortured by the gang was not allowed to attend to the baby.
In addition to torture, the gang also destroyed the palm wine tapper’s house and banished him from the community, after he was made to pay N50,000 as fine to secure the release of his wife and two daughters.
On Thursday, last week, Oba Moruf was invited by the Lagos Assembly Committee regarding the investigation into the crime. A source familiar with the meeting of the Oba with the committee told our correspondent that the Oba’s demeanor at the meeting was cooperative, and he did not spend much time. The previous day, Wednesday, the Iyaloja (Ejigbo Market women leader) also visited the committee on invitation. She was accompanied by her husband, who pledged support toward the investigation.
The Babaloja, who allegedly received a fine from the palm wine tapper and also supervised his banishment, did not honor an invitation by the committee. He gave the excuse that he had injury on his leg. But sources in the market said the Babaloja may have had the injury when he scaled a fence to escape arrest by a police team that visited the market for investigation last week.
At a public hearing upon constitution of the Lagos Assembly committee, the police, the local government chairman, market women and other members of the Ejigbo community had denied knowledge of the crime, even as sources from the community insisted the crime happened in the public glare.
As efforts progressed into finding the perpetrators, the police, through its DPO in Ejigbo, CSP Oliver Abbey had clearly shown complicity and laxity by claiming it doubted the event happened at all, evidently by doing nothing about it. CSP Abbey was later deployed out of the area after his compromised position became clear to his superiors.
It is expected that the arrested gang would be tried for the crime of murder, and the illegal sum collected from Mr. Freeman, the palm wine tapper to secure his wife and daughters recovered.
Mr. Freeman’s family is also expected to be rehabilitated.
N50,000, Gang, Palm wine tapper, crime of murder, Ejigbo community, Ground pepper