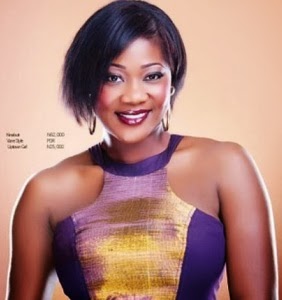 Nollywood screen goddess, Mercy Johnson looks all cleaned up and flashy on TV, but she was not always like that.

In a exclusive interview with the Saturday Tribune, the famous actress revealed hidden secrets about her life before the fame, money and marriage.

Mercy Johnson talks about how she once lived in an uncompleted building and how she was inspired to start acting after watching one of Genevieve Nnaji’s movies.

Sometimes when I cry in movies, it isn’t the script that makes me cry. When I recall my humble beginning, I give thanks to God. When I remember how we moved into an uncompleted building and had to take cover whenever it rained because of the condition of the house; how my brother did a menial job as a bricklayer to earn a living and those days when we rolled over a stick to cover the windows up till the point when I started acting and raised money to cover the roof… I recall those days we were living with lizards because the floor and the walls of the house were not plastered, or when I had scars as a result of my several falls.” Continue…
How she got into acting..

“After my secondary school education, I failed the University Matriculation Examination (UME) and came back to Lagos to get a degree. While that was on, I watched Genevieve Nnaji in a movie entitled: Sharon Stone. I later approached a friend for assistance to feature in a movie. He said I had a great body and that I would make a good actress. He later took me to the National Theatre, but a role did not come until a year later, when I had my first lead role in a film entitled: The Maid. The Maid was my starting point and it was quite challenging to play the lead role because it was my first movie. I was fidgeting when I saw the likes of Eucharia Anunobi, whom I regarded as a screen goddess during my secondary school days. I never thought I would make it with people like that. So, when I saw her, I was so excited and considered standing beside her as sacred. She actually realised that and later helped me by giving me the needed courage.”
What has marriage changed about you?
Marriage has taught me lots of things and I’ve learnt a lot since I got married too. I know that if I had gotten married earlier, I wouldn’t have made most of the errors I made. It’s good to be married to somebody who is so organised; he brings you up the right way and reminds you of whom you’re supposed to be.You seem to be enjoying marriage a lot.  You even once said that as soon as Purity (her daughter) clocks one, you would be going back to the labour room …
My sister, marriage has been sweet for me because I have the best husband and daughter in the world. Being a married woman, I have learnt to tolerate things more. It has changed my perspective of life and the way I react to things.

But getting married and being an actress are two different things. How do you balance up?
When I’m not at location, I spend quality time with my family. And guess what? My husband has always been there for me and Purity. It’s obvious we are his priority. He’s a loving husband and father.

Your husband does not complain about those times when you are away?
He doesn’t; he understands the nature of my job. He’s the best thing that has happened to me. People usually say men are not reliable. In the case of my husband, he’s a blessing.

What was the point of attraction between you and Mr Okojie?
What attracted him to me was his fearless approach. You know sometimes, you meet some guys and they get intimidated about you, but not with him. The first time we were supposed to have a date, he said ‘Let’s go to my house so you can cook for me’ and in my mind, I was like “Seriously, this guy doesn’t know my name.” So, I said “My name is Mercy Johnson” and he said ‘Yes I know