Mrs Foluke Achudume, wife of the General Overseer and Founder of Victory Life Bible Church (VLBC), Abeokuta, Ogun State, came back to life after she was confirmed dead by doctors. 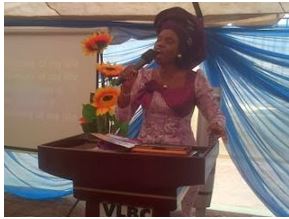 She testified to her congregation on Sunday of how she went to heaven and her experience there.

Read her testimony below:

“What I experienced was like being a drama piece. I saw myself coming out of my body, and going into a white cloud. I didn’t know where I was going, but I was asked to look down, only to see my husband, children been consoled, as my burial was been planned. I saw people crying.”

“Later, I stretched my hand and I was taken to a glorious place, where I saw people in white garment welcoming me, telling me to come in. I joined them, but a big hand stretched out, with a voice saying the place is not for me”.

“I later found myself in another place, more glorious and beautiful, I was not allowed in again, but I was taken to a third place, where I was not allowed again. Then a voice came telling me to look down, and told me I should return to where I was coming from, but I was struggling to join the group. Then I heard a thunderous voice and it was at that point my eyes opened.”
“I stand to tell you that God has power over death. The consultants had confirmed that I bled to death after the operation. If you understand what I went through you will realize that life is vanity. By that experience everything in life to me has lost value. It was not a joke, I appreciate God, because God made me to understand the mystery of life”.

Also speaking on the incident, her husband said when the doctors told him his wife was dead as a result of the operation because she bled to death, he said she didn’t die but went on a visit in faith.