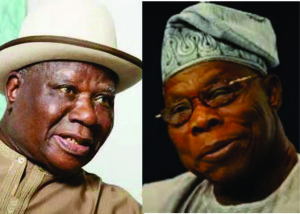 The 10-page open letter written by national leader of Ijaw nation, Chief Edwin Kiagbodo Clark to former President Olusegun Obasanjo, yesterday, opened up a closet of skeletons in the polity.

Eminent Nigerians, who reacted to the letter, expressed mixed feelings. While some viewed the letter as a welcome development, others said it was unnecessary. There were also those who said Obasanjo deserved what he got because he opened the flood gates of exchange of letters, which they argued portended grave danger for the polity.

In the letter, Clark lampooned Obasanjo over his 18-page letter to President Goodluck Jonathan, which accused the president among others of being clannish, lying over his re-election ambition, training snipers and putting 1,000 Nigerians on political watch list. Countering, Clark listed some of the ex-president’s sins to include corrupt enrichment, empowerment of his ethnic group to the disadvantage of other sections of the country and insatiable greed.

Call Clark to order – Junaid Mohammed
In his reaction, Northern political commentator and staunch critic of the Jonathan administration, Dr. Junaid Mohammed, yesterday, asked the president to call Clark to order before he plunges the nation into chaos with incendiary language.
Mohammed noted with dismay the attempt by the Ijaw leader to usurp the power of the presidency and act as if he was Nigeria’s President.

According to the Second Republic Parliamentarian, Clark has no locus standi whatsoever to write the letter to Obasanjo since the former head of state did not address his letter to him.

“Obasanjo raised relevant national issues in his letter to Jonathan and did not send it to Clark or made reference to the Ijaw leader. If I may ask, on what basis did Clark write to Obasanjo?

“I find it extremely irresponsible and unbecoming of the likes of Clark to take it upon themselves to insult international leaders like Obasanjo for offering some pieces of advice that Jonathan should have taken quietly with humility and thanked the former president for his admonition,” Mohammed said, adding, “the letter written by Clark to Obasanjo exposes the weakness of President Jonathan’s Presidency and calls to question whether the president or proxies are in charge of the administration”.

Clark has right to defend Ijaw — Ezeife
Third Republic Governor of Anambra State, Dr. Chukwuemeka Ezeife said: “Anyone who writes should be very sure of what he writes on national issues. It should involve going down memory lane to bring out relevant facts. That is what I think Edwin Clark has done. As a leader of the Ijaw people, he has no choice than to speak out when the Ijaws were mentioned in a manner that he did not find comfortable. He is only trying to put out the fire, since Obasanjo accused the President of being held hostage by his people. It is not good for us to be allowing anybody to be throwing darts at the nation. Such an act reduces the presidency.  Not replying Obasanjo will mean an insult to President Jonathan.

He said: “Obasanjo opened the flood gate of letter writing and he should know that he is not the only one who has a pen in Nigeria. Others who are knowledgeable about the affairs of Nigeria like him are definitely going to comment. I have read through the letter by Chief E.K Clark and I think he has served Obasanjo good measures. I think the time has come for Obasanjo to be unravelled and for him to know who he really is. I give kudos to Clark for that wonderful letter”.

Clark’s letter is welcome –Falae
Former Finance Minister and political opponent of Obasanjo in the 1999 presidential elections, Chief Olu Falae in his own reaction said: “This is a democracy. If anything is topical, everybody should be free to comment on it. There should be no hide and seek about such matters. If it is topical and I feel like commenting, I should be free to comment. Comments are free, only facts are sacred.”

President of Aka-Ikenga, an Igbo intellectual think tank group, Goddy Uwazurike called for an end to the exchange of open letters to enable President Jonathan concentrate on the task of governance.

His words: “Chief Clark’s letter is one in a set of letters. Many of us were not happy with Chief Obasanjo’s open letter because it was bound to open floodgate of letter exchanges, which will not be about the nation but individuals. Clark and Obasanjo were ministers under General Yakubu Gowon. They are not strangers to themselves so Clark has the right to write Obasanjo. However, these letter writings should stop; let us allow the president to lead the country”.