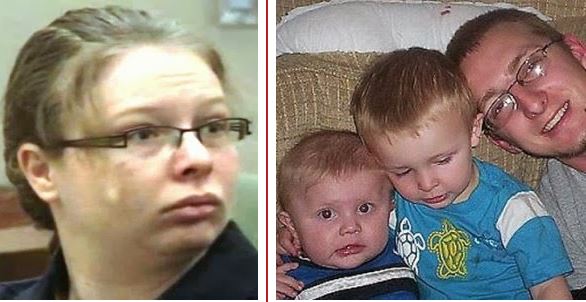 The mother of the two boys who died of hyperthermia has been arrested. Authorities say they found out she was having sex with her boyfriend while the kids were left alone for two hours with the heat on in the car. (The boys and their father pictured above) The story below…

A mother whose children died after she locked them in the car with a heater running, while she had sex in another vehicle, is on trial for homicide.

Prosecutors say Heather Jensen, 25, carried out a “death sentence” against her two young sons when she locked then in the hot car, Fox 31 Denver reports.

Her defence says her actions should be assessed with regard to her low IQ, her youth and the fact her husband died six weeks earlier in a car accident.

“It was a tragedy, but it was an accident. It was not a crime,” said public defender Elsa Archambault.
Ms Jensen sobbed loudly as her trial opened last week in Mesa County District Court, Colorado.

Ms Jensen’s sons, William, 2, and 4-year-old Tyler, died on November 27, 2012. She told her new live-in boyfriend she was taking the boys to play in the snow and drove them to a snow park, where she met up with a male friend to have sex in the car park.

At first, she left the two boys in the car with the heat on and the doors unlocked.

After about 30 minutes, Tyler opened the door and Ms Jensen returned him to her car, gave him a mobile phone to play with and secured the child locks before returning to her friend.

The children are said to have spent 90 minutes in the car, where an investigation revealed temperatures could have reached 60 degrees Celsius. Both boys died from hyperthermia.

Ms Jensen’s defence attributes her poor decision making to her low IQ of 76, which makes her borderline developmentally disabled.

A boyfriend also told investigating police that Ms Jensen had smoked marijuana the day before the children died.

In the three months leading up to the deaths, she had failed court-ordered drug tests three times, the Daily Sentinel reports. The testing was tied to a March 2012 arrest for domestic violence. Her husband Eric had told police Ms Jensen became violent after he confronted her about spending time with friends who supplied her with painkillers Vicodin and Percocet.

Following the deaths of her sons, Ms Jensen also violated the terms of her probation and left Colorado for Florida, to be with her family.
“I believe it would be a great opportunity for me to start my life over again in Florida, and being surrounded by all my family who loves me to help me get through the losses I’ve had in this past month,” Ms Jensen wrote in the letter to a Mesa County judge. “And I would greatly appreciate it if you will let me move on with my life in Florida.”

Ms Jensen’s request was denied and she was arrested at her mother’s home in North Fort Myers, Florida on January 16, 2013.

The jury deciding the case was made up of 10 women and five men, but a judge removed one of the jurors from the trial when he found out she added a witness from the trial as a friend on Facebook, CBS Denver reports. The trial is expected to run for nine days.