A mother cannot kiss or cuddle her young son because every time she does his skin blisters and falls off. 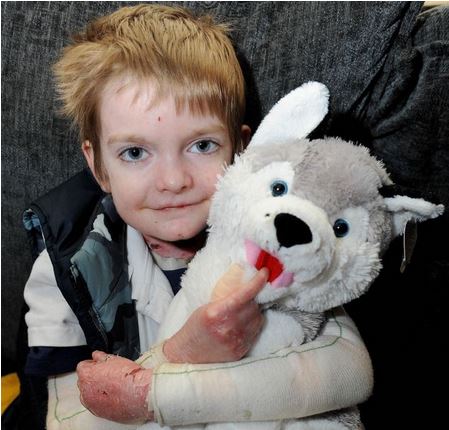 Rhys Williams is covered from head to toe in agonising blisters, leaving him in too much pain to even be hugged by his parents.

It is an excruciatingly painful condition which causes blistering and leads to open wounds.

His condition is incurable and causes his skin and internal tissue to blister at the slightest knock or rub, leaving him with painful open wounds.

The agony is so severe the youngster even had to take morphine to control the pain and it takes him three hours to have a bath.

His mother, and full-time carer, Tanya Moores, 30, said: “I feel like the worst mum in the world when it comes to bath time – it’s utterly traumatising to see him screaming and writhing in pain.

And to know I can’t cuddle him better in case the friction tears his skin off is heart-breaking.

He had to take morphine at one stage to cope with pain but he’s such a little fighter that he refuses to take any painkillers these days.

Occasionally he will have a standard paracetamol.

He is unable to play outside with friends, go on holidays, attend birthday parties and even go shopping in public with his mother, father Mark, 45, and sister Teegan, 18-months.

He also has to be fed through a tube as eating solid food can cause his gullet to blister.

Ms Moores said: “It’s getting to the stage where he’s too embarrassed to go out with me as grown adults just stare open-mouthed at him.

In the past he’s said, “Mummy please cover me, that woman’s staring”, and I lost my cool.

I’m fed up with rude remarks, one woman even told me I was out of order for letting him near a kettle because she thought he’d burnt himself.

There’s not enough awareness about his condition and that’s what I hope to change.”

After hearing about two young boys who died from the same condition, Rhys wrote a heart-wrenching bucket list including sending his parents away on holiday and making his sister a princess for the day.

Rhys was given his own fire safety gear after being made an honorary fire fighter for the day as he barked out orders to his colleagues and let loose with the hose.

Station Manager Steve Parkinson said: ‘We wanted to give him a day to remember at the fire station and I know it was a complete surprise to him.

“He had no idea and arrived with his mum in a blindfold, and when he took it off he was in front of the fire engine with White Watch lined up on parade and his little face lit up. We made him an honorary fire fighter for the day and put him in charge.”

The family currently have to travel 200 miles to Birmingham Children’s Hospital for regular check-ups, as well as receiving support from specialist EB charity DEBRA.

The group’s chief executive Ben Merrett, who has worked with the family since Rhys was first diagnosed with dystrophic epidermolysis bullosa, revealed just how traumatic the condition can be for sufferers.

He said: “Imagine endless rounds of changing dressings, lancing blisters and cleaning the open wounds that develop all over your child’s body.

This is the reality faced by many families just like Rhys’ who are affected by EB.

EB is an excruciatingly painful genetic skin blistering condition which is caused by a breakdown in the natural proteins that hold the skin and internal membranes together.”

Ms Moores is hoping to raise awareness about Rhys’ condition, as well as donations to help him achieve his other goals.