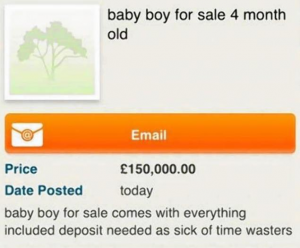 After hundreds of concerned viewers reported the listing, social services authorities showed up at the mother’s house. They took both the 4-month-old listed in the ad and his 2-year-old brother.

The mother claims the ad was just a joke, but she doesn’t appear to be convincing any authorities.

“I put it on Gumtree that I was selling a baby for £150,000. I just plucked that number out of thin air and I claimed I was acting as an agent for a friend,” the mother said. “It was very stupid and I shouldn’t have done it, but I didn’t think it would be taken seriously. I love my boys. I had been joking with my ex about selling sperm and eggs and he sort of dared me to put up a baby for sale – but I didn’t mean our children. I was crying and begging at this one social worker’s feet, but she just took my son away.”