One sneaky little transfer story in the French newspaper Le Parisien on Friday linked Hazard to PSG. The report claimed the 23-year-old has told his friends he will be moving to the Ligue 1 champions but, however; admitted Chelsea will be reluctant to let the player go in the ongoing winter transfer window.

The Portuguese boss took his time to quash the rumour following Chelsea’s 2-0 win over Stoke City at the Britannia Stadium, where Hazard won the Man of the Match award following another impressive display.

Mourinho said: “The club doesn’t want to sell him. Obviously the manager has that decision. Every manager wants players like him. I cannot put too much pressure on him to be man of the match every game or be bthe guy who opens the scoring.

“What I expect is the motivation and responsibility he is showing every week. Last year you saw a talented Hazard, this year a much more mature player. He deserves more than a man of the match, probably player of the month. Not many are doing what he is doing.”

Meanwhile the Belgian says he “enjoys” football a Stamford Bridge and has pledged his 100% commitment to the Blues.

“I tried to give my best for the team and get the three points,” he said after Saturday’s win. “Jose told me to work harder in training.

“I am 23, I’, old, I understand things in football now and in trtaining I’ve been giving my best. I’m enjoying it here, I like this club and will keep going for a long time.”

On Chelsea’s chances of ending the season at the top, he added: “We will see after February and March where we are, we are a young team.”

Hazard opened scoring before Fernando Torres ensured all three points and a top-of-the-table berth for the West Londoners for at least 24 hours. 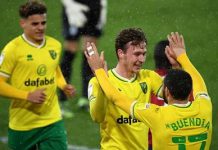