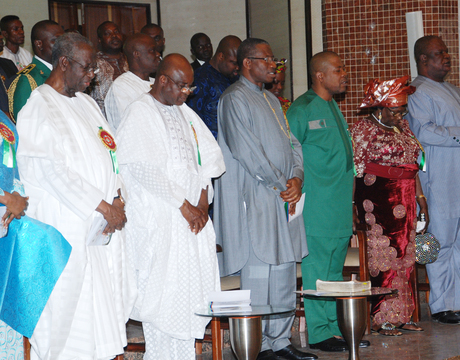 President Goodluck Jonathan on Sunday warned politicians and elder statesmen to guard their utterances to ensure they always promote peace and unity.

Jonathan, who was speaking at an inter-denominational church service organized as part of activities to commemorate the 2014 Armed Forces Remembrance Day which held at the National Christian Centre, Abuja, urged elders to emulate fallen heroes of the Nigerian Armed Forces, who he said paid the ultimate price to keep the nation united.

Although, he did not mention the name of any politician, the president alleged that senior citizens between the ages of 70 and 80 years, who knew that the unity of Nigeria was paramount than any individual’s interest, encouraged youths to hate and carry arms to kill others.

The President also cautioned that his re-election bid should not lead to bloodshed.

He also advised those defecting to do so well and those staying to remain steadfast.

Jonathan said: “We are also to emulate them. Those who have paid the supreme sacrifice to keep our nation together; those of us who are alive, especially leaders today, should think of what we can do to honour them. This is to know that whatever we say, whatever song we sing, it should be a song that will bring honour to them and peace to this country.

“Sometimes, they preach hate and even encourage young people to carry arms and kill one another”.

On his ambition, Jonathan said: “I have always said it that any ambition I have at any time is not worth the blood of any Nigerian. I will never ever expect a Nigerian to spill a drop of his blood because Goodluck Jonathan must fulfil his ambition.

“If all of us collectively talk about the unity and peace of this country, then all our economic and security problems will be resolved and the country will move in the direction we want it to”.

On the significance of the Remembrance Day, he said: “Today’s occasion, as we all know, is a service to remember our Armed Forces. The concluding programme is on Wednesday, January 15. This programme was launched on December 16 (last year). From the day it was launched, there have been a lot of commitments as people have donated various sums of money. Even after that launch, I’ve seen so many people wearing the tags…

“The Armed Forces Remembrance Day is a unique occasion, but this year’s programme is even more unique because on January 1, this year, Nigeria made 100 years as a nation. It’s not easy to get there.

“There were lots of challenges. For us to have reached 100 years some people paid dearly for it; some people worked for it.

“The first group of people we can remember, who worked and paid dearly for it were in the Armed Forces. You know the challenges they faced during the Civil War. But for them, we wouldn’t have celebrated the centenary”, the president said.

The Archbishop of Methodist Church of Nigeria in Abuja, Archbishop Job Oche, admonished the political class to stop threatening the corporate existence of the country ahead of the 2015 elections.

He said: “May I advise all politicians here to give us peace of mind. People have started to fear how 2015 will look like. If you need our votes, don’t threaten us. Begin to preach peace. That will make us to come out and vote”.

The first reading was taken by the Chief of Army Staff, Lt. General Azubuike Ihejirika while the president took the second reading.

Others were: the Secretary to the Government of the Federation (SGF) Anyim Pius Anyim, Minister of States for the Federal Capital Territory (FCT), Oloye Jumoke Akinjide, ministers and other top government officials.

Widows, widowers and children and relatives of the departed Armed Forces personnel also attended the service.