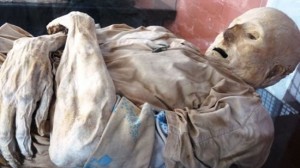 The ancient Egyptians spent centuries developing their mummifying techniques, but at a cemetery in San Bernardo, a small Colombian town, corpses somehow become naturally mummified in their coffins.

The phenomenon was first noticed 15 years ago, by grave digger Eduardo Cifuentes. “The burial pit was full of bodies,” he said. “I didn’t like stepping on them because they were humans like us so I started organizing them.” It’s only because of Eduardo’s efforts that the mummies are being talked about. He said that the mummified bodies have been around since about 1957, but no one paid any attention to them. “I liked the idea of keeping them for posterity,” he said. With the passage of time, the mummies’ clothes and skin have turned brown. Their skins look pasty and wrinkled.

Scientists have no idea why this is happening. The only other site in Latin America where natural mummification takes place is the Guanajuato, a town in central Mexico, where underground gas and soil conditions are the secret. But the same cannot be said for San Bernardo, because bodies are buried in chambers above the ground (as is customary in Colombia) so they do not come into contact with the earth.

Locals have a few explanations of their own. Some attribute it to the purity of the village water and lack of chemical additives in their food. A few of them think the ground temperature of the village is conducive to the mummification process. Some think it’s because of two unusual fruits in the local diet – guatila and balu. Guatila is a hard fruit, about the size of an orange. It is deep green in color with thorns on the skin. Villagers peel and boil the fruit, and add it to their soups. Balu looks like a giant green bean pod that has been opened. Its oversized purple beans are cooked and mashed into flour for cakes.

Another interesting explanation is that around 1957, the cemetery was moved from its old location to the current one. “I think the location of the cemetery, the actual site, I think it is something to do with the Universe, because it never happened at the old cemetery, never. No mummies ever came out from there,” said Jose Del Carmen Rojas, a local.

For now, the mummies are all set to become a major tourist attraction in Colombia. Mayor Antonio Acosta has ordered the construction of a special museum behind the cemetery, where eight of the best preserved mummies will be displayed on concrete slabs, under glass. While tourism could boost the economy of the small village, not all the locals are happy with the idea. Claudia Garcia, a San Bernardo housewife, said, “Some people say they’re not going to have a bunch of kids coming along and poking fun at their dead relatives.” While that might be true, it looks like San Bernardo’s dead will succeed in putting this sleepy little village on the map.