Controversial Lagos miracle Pentecostal priest, Pastor Ofuche Ukoha, popularly known as ‘Sign Fireman’ has been implicated in a ritual murder scandal involving a boy in his church who strangled a 12yrs old teenage girl while trying to obtain excreta from her for rítual purposes. 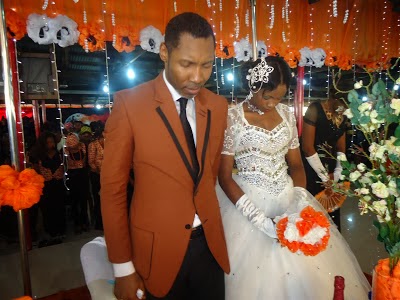 Pastor Fireman got married not too long ago to this beautiful lady in Lagos.

The disclosure of Pastor Fireman’s involvement in the scandal was made by an 18 year old boy paraded by the police in Lagos. During the parade, the suspect said he was sent on the ritual mission by Pastor Fireman.
He said he had always dreamt of becoming rich and had approached the pastor, after few years of attending his church without his own financial miracle happening. Mr. Fireman reportedly told him the way to get his Sign for money was to get the feces of a virgín girl.

The young man said Pastor Fireman promised him a reward of N100,000 for the assignment.
The suspect narrated how he sought and killed the 12 year old girl simply named ‘Bose’, the daughter of poor woman on his street.
Confirming the incident to a reporter, Lagos Police PRO, Ngozi Braide said Pastor Fireman was arrested on Tuesday, five days after he was declared wanted by the police. She said investigation has commenced with regards to the controversial pastor’s involvement.
She also said the outcome of the investigation would soon be made public and necessary action will follow.