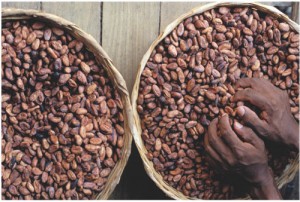 Nigeria will earn about N104 billion from the export of cocoa this year as the output of the product is set to rise by 10 per cent, the Cocoa Association of Nigeria has revealed.

According to the association, this is due to a rise in the price of the commodity last year which resulted in planting of more disease-resistant beans in the country this season.

Speaking in a media chat in Lagos, spokesperson for the association, Robo Adhuze noted that Nigeria will harvest 225,000 tons of cocoa this season, according to Amsterdam-based trader Continaf BV estimate.

“Output for 2013-14 will probably rise by 10 per cent as higher prices enable more farmers to buy agrochemicals to protect their crops,” noting that the association is still collecting data for the year in line with the outlook.

Cocoa rallied 21 percent in New York last year partly on speculation dry weather would damage crops in West Africa. The farm-gate prices for cocoa beans increased 40 percent to N420,000 or $2,592 per metric ton as of Jan. 23, from N300,000 a year ago, said Adhuze,.

“Nigeria’s main crop, being harvested now, can be affected by fungi diseases such as the black pod but the impact on production is minimal owing to pest control.

The new crop varieties supplied by government produce 1 1/2 tons of cocoa per hectare 2.47 acres each season compared with the older types which yield 1/2 ton,” Adhuze said.

Nigeria is distributing early-maturing, high-yielding, disease-resistant beans that mature in about 18 months to farmers to replace the traditional crop with four to five years maturity, Malachy Akoroda, Chief Executive of the Cocoa Research Institute of Nigeria, said in August.