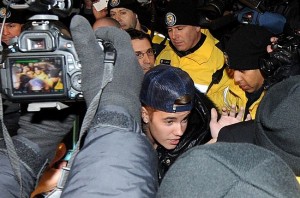 Justin Bieber turned himself in to Toronto police on an assault charge Wednesday, the second arrest in a week for the baby-faced 19-year-old pop star. Bieber arrived in the yesterday evening at a police station to a crush of media and screaming fans.

A police official said the charge has to do with an alleged assault on a limo driver in December. The official spoke on condition of anonymity because they were not authorized to speak publicly.

“We anticipate that this matter will be treated as a summary offense, the equivalent of a misdemeanor in the United States,” a statement from the singer’s camp reads. “Our position is that Mr. Bieber is innocent. As the matter is now before the court, it would be inappropriate to address the specifics of either the allegation or of our defense at this time.”

Toronto police said in late December they were looking into allegations that a member of Bieber’s entourage assaulted a limo driver who was ferrying the Canadian pop star and several others. Police said at the time it was unclear whether Bieber was involved.