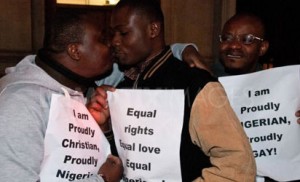 The incident was said to have occurred January 15 at the upper buttery of the popular Awolowo Hall in the campus, barely a week after the anti-gay bill was signed into law by the presidency. The suspect, Izuchukwu was reported to have been given 10 strokes of the cane as punishment for his act.

The incident allegedly happened on 15th January, 2014 at upper buttery of the popular Awolowo Hall on the campus.

It was reliably gathered that Izuchukwu, a 300 level student of the Faculty of Law of the institution, attempted to have carnal knowledge of a fellow male student when the victim was reading in one of the halls at about 4am.

The victim was said to have fallen asleep when there was power outage before the gay student approached him, started caressing him and attempted inserting his manhood into his anus.

Luck however was said to have cheated Izuchukwu when the victim woke up and raised alarm. The gay suspect was said to have taken to his heels before some students chased and apprehended him at the neighbour female hall of residence called Mozambique.

Some concerned students were said to have dispensed justice on Izuchukwu by given him ten strokes of the cane and also ordered him to write an apology letter and paste same on all boards in the campus’ halls of residence.