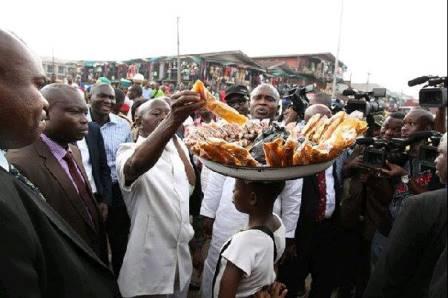 Following the criticism that greeted his now regrettable stern words to a widow that she should “go and die” for hawking on the sidewalks of Benin City, the Edo State capital, in violation of road traffic laws, Governor Adams Oshiomhole on Tuesday allegedly gave out a cheque of one million to a child hawker at New Benin, by Total filling station.

According to an exclusive by blogger Stella Dimokokorkus, the governor and his entourage were walking by apparently on an inspection tour when some child hawkers on sighting them, took to their heels in fear.

However, a little girl hawking fried plantain chips refused to run and instead greeted the governor as he came closer.

Not sure what to expect, the girl stood with her tray of plantain chips on her head, stunned by her boldness, Gov. Oshiomhole reportedly drew nearer to the girl, took out his pen from his pocket and signed her a cheque for one million naira.

In her excitement, the girl threw away her tray of plantain chips and began to scream with joy as she thanked the governor profusely for his kindness and generosity.