The Manchester United and England footballer Chris Smalling has apologised for his ‘ill thought out and insensitive’ decision to dress as a suicide bomber at a fancy dress party. 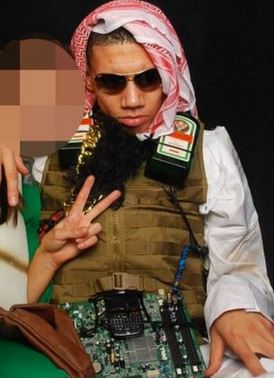 The 24-year-old sparked outrage after being photographed dressed in an Arabic kaffiyeh headdress and military-style vest with a fake circuit board and cables attached.

Smalling claimed the outfit was ‘an attempted comedy play’ on the popular ‘Jagerbomb’ alcoholic drink, which is thought to be why he attached bottles of Jagermeister and Red Bull to his belt as imitation grenades.

The costume has caused fury among survivors and relatives of those affected by terrorist attacks.

Speaking to the Sun the father of a young man who died in the July 7 2005 terror attacks in London said he ‘could not condemn the costume strongly enough’.

Oldham resident Graham Foulkes, 61, whose 22-year-old son David was killed at Edgware Road by suicide bomber Sidique Khan added: ‘It is one of the most offensive things I have ever seen’.

Jacqui Putnam, who survived the Edgware Road blast in 2005, said people should ‘think twice’ before making light of terrorism.

She said that even after eight years, people affected are still coming to terms with the terror attack, adding ‘It does not make it any easier when you see people who make light of it.’

‘It is silliness really. I do not think people who do these things mean any harm but unfortunately the affect it has on people like me and people who are in a worse position – those who lost loved ones – is hurtful,’ she said.

Ms Putman went on to say: ‘I am sure that he did not mean to offend anyone but I wish people would think twice… If people could only think twice about the pain this could cause to people who have lost loved ones in these circumstances it would be appreciated by survivors and the bereaved alike.’

David Moyes Smalling Stupid: Chris Smalling (right) has already made 20 appearances this season for his embattled manager David Moyes (left). His decision to dress up as a suicide bomber has been branded stupid and offensiveI.

In response to the anger over his costume, Smalling issued an apology through his management company, Wasserman Media Group.

The statement read: ‘Chris and his girlfriend hosted a fancy dress party to celebrate Christmas and their belated birthdays with close friends in the assumed privacy of his own home.’

It added: ‘Although he fully accepts in hindsight it was an ill-thought out and insensitive decision, absolutely no harm was intended whatsoever and he apologises for any offence caused’.

Des Wright, Chairman of the Chester and North Wales branch of the Manchester United’s supporters association, told MailOnline: ‘I just think he was bit daft really.

He’s a very intelligent man and should have known better. But I don’t think there will be any fallout. Not when royalty do similar things. Didn’t Prince Harry dress up as a Nazi?’

He added: ‘I think the supporters as a whole will feel exactly the same way as me. He was stupid, but he’s apologised and that’s definitely the right thing to do. I think we should all move on now.’

Smalling signed for Manchester United from Fulham four years ago, in January 2010. He has already made 20 appearances for embattled manager David Moyes this season, and is seen as a key member of both the Manchester United and England squads.

Smalling made his senior England debut in a Euro 2012 qualifier against Bulgaria in September 2011 and has since made eight further appearances for the national team.