Defending champion Novak Djokovic has been eliminated by Stanislas Wawrinka after an epic quarter-final tie at the Rod Laver Arena.

The World number eight came back from a set down to finish off a tightly-contested five set match, bringing an end to Djokovic’s 25-game Australian Open unbeaten run and 28 Tour matches unbeaten run on Tuesday.

“I was playing really good, I tried to fight,” said Wawrinka who had not won Djokovic in 14 successive matches since 2006.

Djokovic comfortably made his way through the first set, thanks to some lose error from Wawrinka in game six, but the Swiss came back hungry in the second.

Wawrinka won a breathtaking rally with a superb backhand down the line to break 3-3 on his way to taking the second set.

He stepped on his gears to take the third 2-6, at which point a first loss for the 26-year-old 2013 champion under new coach Boris Becker was beckoning.

There were signs of fragility on Wawrinka’s more suspect forehand wing in a tight fourth set, and Djokovic came storming back from 40-0 down to break at 4-3.

Djokovic took a game in game three of the deciding set, but handed it straight back to the Swiss with three forehand errors in a poor service game.

Serving to stay in the match for the fourth time, Djokovic found himself match point down, he gambled on following his serve into the net at the crucial moment, only to steer a forehand volley into the tramlines. 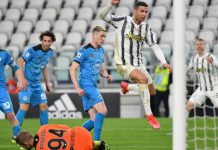