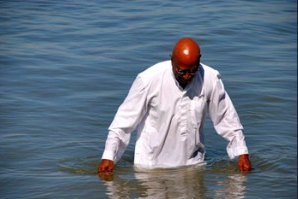 In the last 24 hours, the story of a pastor’s failed attempt to walk on water has gone viral. Walking on water is not easy. Not too many people have the ability. Let’s see, there’s Jesus, and well, that’s about it. Unfortunately for one pastor on the West Coast of Africa, his attempt to become the second man to make this impossible feat a reality cost him his life.

Pastor Franck Kabele, 35, told his congregation that he was capable of reenacting the very miracles of Jesus Christ. He decided to make it clear through way of demonstration on Gabon’s beach in the capital city of Libreville.

Referencing Matthew 14:22-33, Kabele said that he received a revelation which told him that with enough faith he could achieve what Jesus was able to. According to an eyewitness, Kabele took his congregation out to the beach. He told them that he would cross the Kombo estuary by foot, which is normally a 20 minute boat ride.

Sadly by the second step into the water Kabele found himself completely submerged. He never returned. Despite the very real possibility that a person would attempt something like this and drown as a result, it appears that this story is likely a fake. This exact story first surfaced on the Internet back in 2006, and since then, it has popped up at various times.

Whether or not the story of Pastor Franck Kabele is fact or fiction remains to be seen, but the fact that it has gone viral seven years after its initial reporting is a testament to the overwhelming power of the Internet.

However…this story is real. At Ibadon zoo in south-west Nigeria, a self-proclaimed Prophet claimed to be able to do what the Daniel of the Bible did by walking into a den full of lions.

Though he was warned numerous times by zoo keepers, the Prophet thought of them as nothing more than enemies of progress. The Prophet, with a crowd of people watching, put on a long red robe and proceeded to enter the cage full of lions.

Within seconds of opening the door, the lions ripped the Prophet from flesh to bone. The Bible should come with a warning label, “Don’t try this at home.”