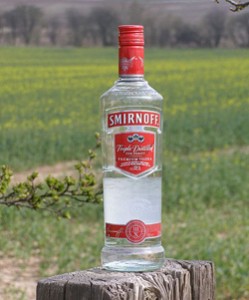 A woman in Germany celebrated her upcoming liver transplant operation in the worst way imaginable: with a big bottle of vodka.

The incident is just the latest in an ongoing scandal involving a former head of transplants, which has led to a decline in organ donations in Germany.

According to TheLocal.de, a nurse working at the University Hospital in Göttingen claims to have found the alcohol in a patient’s bag. The nurse recently explained in court that the unidentified woman admitted to boozing it up the day before her liver transplant operation.

Why not, I suppose? She must have figured since the doctor was getting rid of that old liver, might as well take it out for one last spin!

The problem is that the woman should never have actually received a new liver in the first place. Patients are supposed to be sober for at least six months before getting the operation.

The former head of transplants at the hospital, only identified as Aiman O., has been defending himself in court for allegedly manipulating medical files so his patients could receive transplants faster. He’s been charged with eleven counts of attempted manslaughter and three cases of grievous bloodily harm.

Due to the scandal, trust in the organ transplant system in Germany has plummeted, leading to a nationwide advertising campaign designed to get people to donate organs again.

It could have been worse, at least the surgeon didn’t brand his initials on the liver during the operation. That kind of stupidity is reserved for Britain.