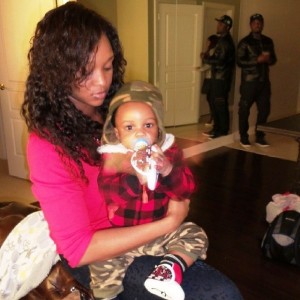 Paul Okoye is the twin of Peter Okoye, together forming — P-Square; but the two still have several differences.

Unlike his twin brother, Paul Okoye is shy a not social media-prone.

It was a shock to even see him update his Instagram account with pictures of his new family.

Paul Okoye of P-Square posted a photo of his wife-to-be Anita Isama and little son — Andre on his Instagram page with the caption, ‘Family is everythin….love u both‘.

Paul and Anita welcomed Andre on Thursday, April 11, 2013 in an Atlanta hospital, US. 37 days later the singer proposed to his lover.