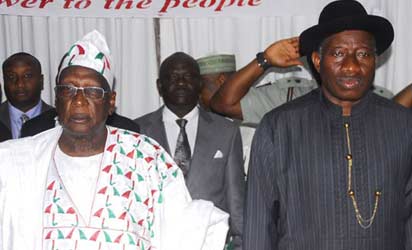 The crisis rocking the Peoples Democratic Party, PDP, took a turn for the worse on Monday as the embattled National Chairman of the party, Alhaji Bamanga Tukur, declared that he cannot be forced to resign, not even by President Goodluck Jonathan.

He said since he was elected at a convention, he can only be removed through the same process and not through a political gang-up.

In a three-paragraph statement entitled “Convention, Not Jonathan Can Remove Me”, which he personally signed and issued to journalists in Abuja, Tukur also dismissed media reports that the president had asked him to resign from his position, stressing that the rumour was being planted by those he described as being in the opposition.

Tukur said, “I am an elected National Chairman, I have my certificate of return, I cannot resign. The convention brought me, so it has to take the convention that brought me for me to resign.

“So, not even the President can ask me to resign. Remember, some members of the National Working Committee were asked to go recently because the election that brought them was flawed. So, Mr. President cannot thread that route again”, he said.

Tukur also maintained that he had not been accused of breaching the party’s constitution and that no one had successfully proved any allegation of wrongdoing against him.

Information Nigeria reports that Tukur’s fate will be decided at a National Executive Committee, NEC, meeting of the PDP slated for Thursday.