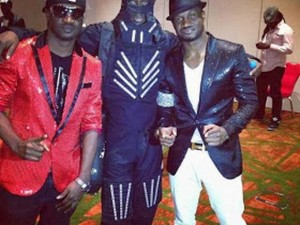 The outspoken twin of the P-Square duo — Peter Okoye, has come forward to defend their lackluster performance at the CAF Awards last night.

Traditionally known for their electrifying dances and stage performances, the P-Square duo are normally the rave of the moment at any show they attend; until last night, that is.

Social media was flooded with surprise and shock at the Personally duo’s performance, and it was so bad, Peter Okoye had to come out and apologize.

Peter Okoye however defended his performance, posting through his Twitter account that he “heard the sound was bad from the broadcast”, but that it wasn’t their fault and that “the show must go on”.