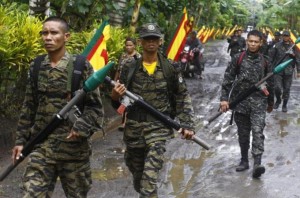 The government of Philippines says it has signed a deal with the country’s largest Muslim rebel group to end four decades of conflict in the south that has killed tens of thousands of people.

The accord, along with three other agreements, will make a comprehensive peace pact that is expected to be signed in Manila soon. The final talks were held in Kuala Lumpur in Malaysia, which has been brokering the negotiations.

President Benigo Aquino hopes to secure a final peace settlement before leaving office in mid-2016 to end the rebellion by Muslim groups, which has left 150,000 people dead.

Negotiators met from Wednesday on the outskirts of Malaysia’s capital Kuala Lumpur to tackle a “normalisation” deal detailing how the rebels will hand over their weapons and the creation of a security force to police what would be a Muslim self-rule area.

The deal is the last of four power-sharing accords that must be agreed between the government and the Moro rebels, before a final peace deal can be signed.

Chief government negotiator Miriam Coronel Ferrer said: “The peace process… is aimed to really bring about a good foundation for sustainable peace and development in Mindanao and in that sense we consider this a very important development”.