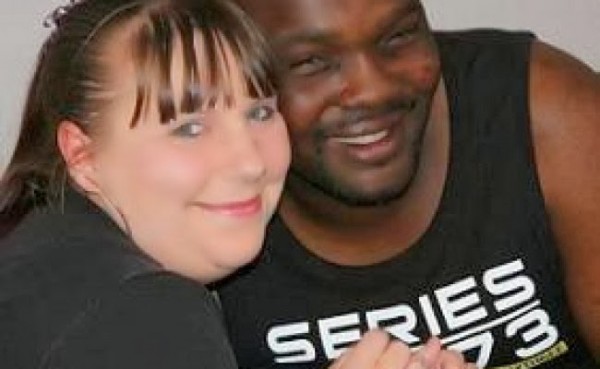 Speaking in a new interview, the Lagos-based actor Yomi expressed total dismay about the tale, advising those sponsoring it to find something better to do with their time instead of indulging in wasteful ventures.

“My brother, my marriage has not crashed. I don’t know why people are saying that.  It’s just a frivolous talk. I am still in good terms with my wife. There is nothing wrong with our marriage.”

Asked to clear the air on the issue of British passport said to be the cause of the alleged break-up, he reacted:

“That’s not true, people are only saying rubbish.  There was nothing like that in our agreement when we got married. A lot of people have that wrong impression that the reason for marrying a white woman is to secure Green card or British passport as the case may be.  In the UK, they can’t issue you British passport like that.  Everything has stages.  After marriage, they will issue your spouse visa which allows you to stay there for five years.  After that, they will give you indefinite visa, which lasts forever.  During which you can be moving in and out of the UK and still maintain your citizenship.  British passport can only be issued based on request.  They don’t just issue it like that.  When you discover that your marriage has worked and you need British passport, they can give you.

Meanwhile, that wasn’t my priority for marrying her.  Since we got married, I have never collected money from my wife.  Everybody has reason or reasons for marrying whoever he marries.  I didn’t marry Fran because of British passport and I have not applied for it.  So, that can’t be an issue between the two of us.

People are just speculating because they don’t see her around me since we married.  We had an agreement that we will be living in Nigeria but after a while, she couldn’t cope again due to the way area boys used to harass us and collect money.  She said we had to go back to UK but I told her I can’t leave my job.  Nigeria is the best place for me because of my career.  That was just the issue between us, and that has been resolved.

Now we have both agreed that I can come to the UK anytime.  Left to me, the weather there is not good for me. That’s another reason I can’t live there, and she agreed with me.  She also agreed that she will be coming to Nigeria to see me.  So, why are people peddling unnecessary rumour?”

Share
Facebook
Twitter
WhatsApp
Previous article11 Marriage Problems And How To Resolve Them
Next articlePHOTOS: Popular Actress Reveals She Farts And Poops In Front Of Her Lover
- Advertisement -