Archaeologists in Israel have uncovered intricate mosaics on the floor of a 1,500-year-old Byzantine church, including one that bears a Christogram surrounded by birds. 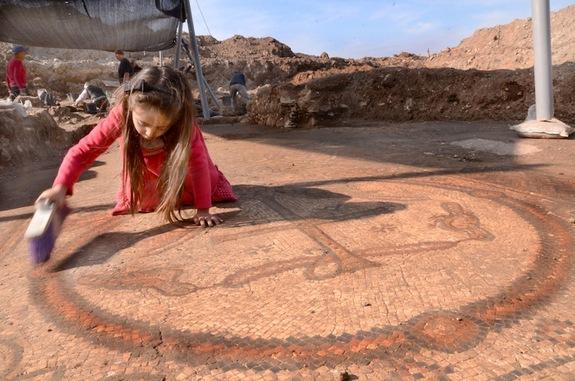 The ruins were discovered during a salvage excavation ahead of a construction project in Aluma, a village about 50 kilometers south of Tel Aviv, the Israel Antiquities Authority (IAA) announced Wednesday (Jan. 22).

Much of the church was revealed during excavations over the past month. The basilica was part of a local Byzantine settlement, but the archaeologists suspect it also served as a center of Christian worship for neighboring communities because it was next to the main road running between the ancient seaport city of Ashkelon in the west and Beit Guvrin and Jerusalem in the east.

The excavators plan to keep working on the site for another week, but one of the most remarkable finds so far was a mosaic containing a Christogram, or a type of monogram of the name of Jesus.

At the time, Byzantine Christians wouldn’t have put crosses on their mosaic floors so as to not step on the symbol of Christ,. The Christogram in the mosaic may look like a cross, but it’s actually more like a “chi rho” symbol, which puts together the first two captial letters in the Greek word for Christ, and often looks like an X superimposed on a P. There is an alpha and omega (the first and last letters of the Greek alphabet) on either side of the chi rho, which is another Christian symbol, as Christ was often described as the “the beginning and the end.” Four birds also decorate the mosaic, and two of them are holding up a wreath to the top of the chi rho.

Inside the 22-by-12-meter basilica, archaeologists also found marble pillars and an open courtyard paved with a white mosaic floor.

Just off the courtyard, in the church’s narthex, or lobby area, there is a fine mosaic floor decorated with colored geometric designs, as well as a twelve-row dedicatory inscription in Greek containing the names ‘Mary’ and ‘Jesus’, and the name of the person who funded the mosaic’s construction.

The mosaics in the main hall, or nave, meanwhile, are decorated with vine tendrils in the shape of 40 medallions, one of which contains the Christogram. Many of the other medallions contain botanical designs and animals such as a zebras, peacocks, leopards and wild boars, the excavators said. Three contain inscriptions commemorating two heads of the local regional church named Demetrios and Herakles. 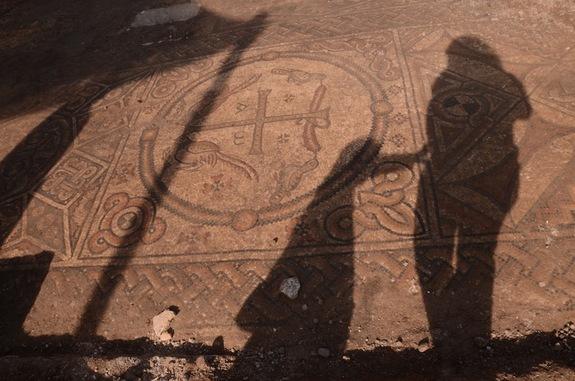 The archaeologists found traces of later occupation on top of the church, including early Islamic walls and Ottoman garbage pits. (Aluma is located near the Ottoman and later Palestinian village of Hatta.) The excavations also revealed Byzantine glass vessels and a pottery workshop for making amphoras, cooking pots, kraters, bowls and oil lamps.

Regarding the new discoveries, the IAA plans to remove the mosaic for display at a regional museum or visitors’ center, and the rest of the site will be covered back up.