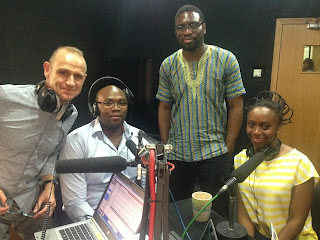 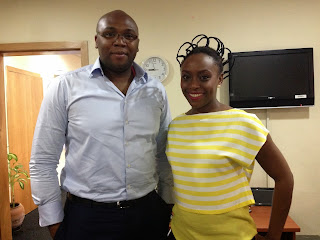 Chimamanda is still rocking the African hairdo! The award-winning writer and author of Half of a Yellow sun& Americanah and leading Nigerian Internet entrepreneur, Jason Njoku of iROKOtv and Spark, were interviewed by the BBC’s Evan Davis and Nkem Ifejika, as part of the BBC’s focus on Nigeria as one of the world’s leading emerging economies. The show was broadcast to millions of people around the world on the Today Programme and on the BBC’s NewsDay on the World Service.

Alongside literary star Chimimanda Ngozi Adichie, whose book Half of a Yellow Sun has been made into a film, Njoku discussed the exciting business opportunities in Nigeria and spoke of the success he has had, not only with Nollywood and iROKOtv, but also with the Spark start-up companies he has invested in, with his business partner Bastian Gotter. Njoku noted the challenges of doing business in Nigeria, but also asserted that Nigeria is a good place for entrepreneurs.

There was also frank and honest discussion from the young entrepreneurs behind ToLet.com.ng, Drinks.ng, Kuluya.com and Bus.com.ng – all of whom are successfully starting exciting internet businesses from Lagos and are pioneering the next generation of young, Nigerian entrepreneurs.