Malaysia is a moderate Muslim country and you can tell that’s so because they banned non-Muslims from using the word Allah and pictures of pigs get censored. 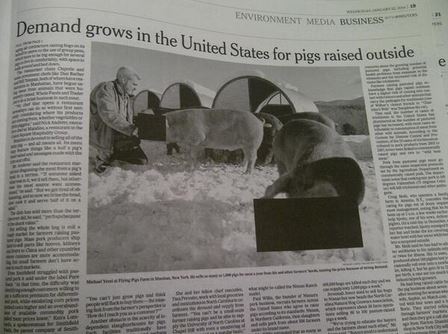 Seemingly innocuous pictures of pigs in the front and middle pages of today’s International New York Times (NYT) have been blacked out in the Malaysian edition of the paper, raising both amusement and concern among readers.

A frontpage story in the international newspaper featured a picture of piglets standing in the snow but the printers of the Malaysian edition, KHL Printing Co, had blacked out the faces of each animal.

A continuation of the story about rising demand for pigs reared in the open on page 19 of the paper got the same treatment, with the faces of two adult pigs blacked out.

A representative from the printing company based in Shah Alam told the Malay Mail Online in a telephone conversation that pictures of pigs are not allowed in a Muslim country like Malaysia.

“From last time also we do this. If there is picture of nudes or like this we will cover. This is a Muslim country,” the spokesman said when asked why the faces of the pigs had been censored.