A pornographic actor managed to film a seedy movie at a university campus in broad daylight. 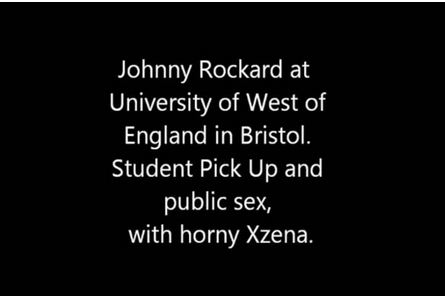 The self-shot film, was given the imaginative title ‘Johnny Rockard at University of West of England in Bristol.

The video has been viewed more than 41,000 times on an adult website.

Police are now investigating exactly how Johnny managed to film his sex sessions on campus with the so-called “student” – both of whom have no connection to the university.

The film shows the actor wandering among students at the University of the West England (UWE) before chatting up pretty student Xzena, 22.

She then performs sexual acts on him at the campus gates and the romp continues on a bus heading into Bristol city centre.

University vice-chancellor Steve West said: “I am appalled that the university should be subject to such behaviour from someone with no connection to the university, resulting in a false and misleading representation of the university.

We have worked with the Students’ Union, staff, our on-campus security, have involved the police to investigate and have taken legal action.”

The film was was shot during the summer holidays but students can be seen milling around the campus in Filton, north Bristol.

Johnny films himself wandering around until he strikes up a conversation with Xzena, who says she is a third-year psychology student.

After engaging in sex acts at the campus and on the bus, other scenes were shot at the steps to a flyover in Bristol city centre and later at a property.

Johnny – who claims his company is “probably the most globally publicised and promoted UK name in adult entertainments” – insisted no laws were broken, insisting the university is a “public space”.

A spokesman for the Bristol-based company said: “It is a public space. If I was in their buildings they could take issue but it is public land, so I have not breached any law.”

She wrote: “This whole experience was exhilarating, and edgy to say the least, and I absolutely LOVED every minute of it!!!”

A spokesman for Avon and Somerset police said they were aware of the incident and were investigating whether any offences had been committed – potentially outraging public decency.

He said: “The incident was reported to us on Monday, January 20. We are investigating an allegation that somebody has gone onto the campus grounds and made an adult film with a suspected female actress in a public space.

We are currently looking into this incident and whether any offences have been committed.”