The South African government has demand the engraved animal be taken removed from the nine-metre tall statue, which has been built in the former president’s honour. 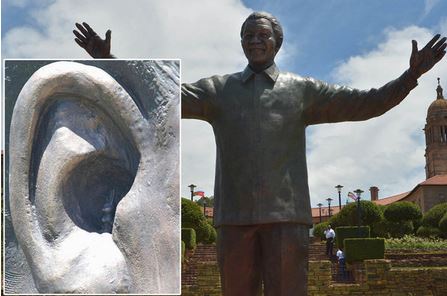 Hidden: The rabbit in Mandela’s ear

Cheeky sculptors have been ordered to remove a bronze rabbit they hid in the ear of a nine metre tall statue to honour the late Nelson Madela.

The South African government said it wanted to “restore dignity back to the statue” , which was unveiled after the former president’s death last month.

The sculptors are said to have secretly placed the rabbit – their trademark signature – into the statue’s right ear.

They also wanted it to denote the speed in which they carved the statue, as rabbit in the Afrikaans language is “haas”, which also means haste.

Global hero Mr Mandela, who died at the age of 95, was widely acclaimed for his role in fighting white minority rule and promoting reconciliation after being elected South Africa’s first black president in 1994.

The bronze statue was unveiled on December 16, the day after Mr Mandela was buried, at the Union Buildings in Pretoria.

Mandela’s hands reach out as if embracing the whole nation.

A spokesman for the Department of Arts and Culture, said the artists Andre Prinsloo and Ruhan Janse van Vuuren, had apologised for any offence caused to the government and Mr Mandela’s family.

They said they had added the rabbit after the culture department had refused to allow them to engrave their signatures on the trousers of the statue.